GCC Presents: Ellen Meister and The Smart One 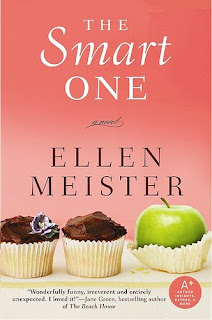 Bev Bloomrosen thinks her sisters see her as a loser. Not that she minds being the Smart One, but she can't imagine she'll ever live up to her family's expectations ... especially since she left behind her artistic ambitions-along with her humor-impaired ex-husband-to pursue a career as a "mere" schoolteacher.
But her sisters have their own image problems. Clare, the Pretty One, married well and seems to have the perfect suburban life, yet worries that the paper thin fabric of her beautiful designer world is ripping apart. And Joey, the Wild One who had 15 minutes of fame as a one-hit-wonder rock star, struggles with sobriety and keeping the secret of her weirdest ambition yet.
They love each other but mix like oil, water, and hundred-proof gin . . . a combination that threatens to combust over family tensions, suspected infidelities, a devastating accident, a stunning confession, and the sudden reappearance of their handsome, now all-grown-up former neighbor, Kenny Waxman, who's back in town making his mark as a TV comedy writer.
It seems they'll never understand where their differences begin and their own destructive tendencies end. Then it happens: the sisters discover a decades-old body stuffed inside an industrial drum and begin a bold, heartbreaking, and sometimes hilarious journey that will either bring them together . . . or tear them apart for good.

Here, she stops by to answer some questions!

1) What's the backstory behind your book?
The inspiration for THE SMART ONE hit me from several different directions. I always wanted to write a sister story because that relationship intrigues me. This thought was floating around in my head when I got an offer on my first book, SECRET CONFESSIONS OF THE APPLEWOOD PTA. I was thrilled about the offer, but also in a minor panic about what it would mean to become a world-famous author. (I'll wait a few moments while you finish laughing.) Yes, I was terribly naive, and didn't realize I wouldn't even become a celebrity in my own house. Still, the thought passed though my head, and it made me wonder what it was about some people that made them actually covet fame. Was it something from their childhood? Something about the family dynamic?

I knew, then, that one of the sisters in my next novel would have to be a character who sought--and achieved--fame. It's not a major focus of the book, but it was a spark that started to make the story gel.

The other big inspiration was a news story that happened right in my home town. A man moving out of his home opened a sealed 55-gallon industrial drum that had been in a crawl space since he moved in ... only to discover a mummified body inside. It was a young woman, nine months pregnant, who had been killed thirty years before. After she was identified as a factory employee of the home's original owner, who had since retired, the detectives went to Florida to question him. They wanted to get a sample of his DNA to test against the fetus's, but before they could serve a warrant for it, the man shot and killed himself.

Of course, I had no intention of writing a true crime story, so I simply used this macabre event as the inspiration for a discovery made by my three adult sister characters ... and it became the catalyst that drives the arc of their relationship.

2) What do you love most about writing fiction? What do you like least?
My favorite part is hearing from readers who I've touched in some way. That makes the whole thing worthwhile. The despair hits when I realize I have to unravel a large chunk of a novel in order to make a change. It's so overwhelming. I start out in a panic thinking there's just no way I can do it. Then I roll up my sleeves and get to work.

3) A lot of my blog readers are aspiring or new authors. How did you land your first book deal?
A lot of time, work and rejection! Wish I had some magic shortcut to suggest, but I don't. Step one is to finish your manuscript and get it as perfect as possible. Step two is to write a kickass query letter, keeping in mind that you're trying to be the one an agent chooses out of hundreds. Most of all, remember that almost every successful writer has a long history of rejections. Keep at it!

4) I have a serious procrastination problem when it comes to tackling my fiction. What's your routine? How do you dive it? Do you have any rituals or necessary to-dos before or while you write?
I, too, suffer from procrastination. Web-surfing is my downfall. Caffeine is my friend. Deadlines also help, so if you don't have someone breathing down your neck, create your own deadlines.

5) Clearly, your book will be optioned for a multi-million dollar film deal! Who would you cast as the leads, if you were given creative control?
My main character, Bev, could be played by Gwyneth Paltrow or Jennifer Aniston. I think they could both be smart, funny and sarcastic. The younger sister, Joey--the wild one and former one-hit-wonder rock star--could be well played by Maggie Gyllenhaal or Drew Barrymore. The beautiful older sister, Clare, is a little tougher because she's voluptuous in a real woman sense (and not in a Hollywood "I weigh 93-pounds but have double-D breast implants" kind of way). So Scarlett Johansson comes to mind, only she's a little too young, and Charlize Theron is a bit too statuesque. Such problems!
Posted by Allison Winn Scotch at 7:15 AM No comments:

To Publish or Not to Publish, That Is the Question

Question of the day: I have been offered publication for a memoir and my poems by Publish America, but have reservations on going ahead with it as I've heard stories of authors not receiving payment for books sold by the publishing company. I would appreciate your opinion.

I really don't know anything about Publish America, to be honest, but I wanted to post your question in case someone else here does. I took a look at their website, and it appears that it's not a self-publishing situation, but I don't know more.

One thing I will say, however, is that it is incredibly difficult for your book to get press, eyeballs and distribution with a traditional, biggie publisher, and I do think you have to prepare yourself for a difficult situation, in terms of making money and getting readers/in bookstores, if you take this route. The truth is, whether or not it is PC to say, is that not all publishers are created equal, and just because you're published, doesn't really mean that things will take off for you.

Which isn't meant to be a downer on your question. Just the honest truth.

Readers out there - anyone know about Publisher America? Thoughts?
Posted by Allison Winn Scotch at 7:02 AM 4 comments:

How Close is Too Close?

Question of the day: Have you ever wondered whether a novel topic is "too close to home?" I'm considering having my main character suffer from postpartum depression, which I had, but worry that my kids may someday read it and assume I am the character. Also, I'm afraid it may make it harder for me to separate myself and stay true to the character instead of trying to have her do what I would do (or did) in the situation. BUT, I also feel this is an important story to tell, and of course events would take a different turn than in my case.

This is a great a question, and one that I definitely feel that I can answer because I've written something that, indeed, in retrospect was too close. And that would be my initial book that never sold. Now, did it sell because it was too close or because it just plain wasn't good? I don't know, but I suspect that the two are probably connected.

Everyone says that you should "write what you know," and to a certain extent, I believe that this is true. I've found, for me personally, that I need to find the seed within my characters that I relate to - something within them that resonates with my own life - so that I can really get under their skin and minds. In Time of My Life, for example, I didn't have a difficult time how off-kilter I would feel if I had long days and no stimulation other than a newborn, and certainly, I could relate to having "what if" moments like Jillian. But - in both obvious and non-obvious ways - my life is really nothing like hers at all. So, in this sense, I'm close to my characters emotionally, but not circumstantially, and I think this is an important distinction. Here's why:

In my first book - that one which got me agented but ultimately never sold - I loosely based the circumstances about an explosive event that happened in my own life. Something a lot of first-timers do. I wrote the first half of it very quickly - it was easy, after all, since I already knew more or less what was going to happen to the characters, since these things had already happened to me. But then...uh...I needed to find a way to steer the characters into fictitious circumstances, because I couldn't make this an autobiography, and I got stuck. I was so caught up in my real life that I couldn't get out of it. So I stopped writing. Eventually (two years later!), I figured out how to sort of realistically take these characters down a different path, but you know what? Their choices never really rang true to me because all I had in the back of my head were the choices that I'd made in the same circumstances.

So I think the thing to do is select a circumstance about which you want to write and about which you have experience, but write around it, not about it. What I mean by that is, if you want to write about PPD, great, but don't put the character in the same situation that you were in. Change her marriage, change her job, change her pregnancy experience, change her relationship with her parents...you get the idea. Your emotional connection with your experience will still align you with the character - and ultimately result in honest, intimate writing - but you won't get bogged down with confusing your real life with hers.

Make sense? Readers, tell me though, how close is too close for you?
Posted by Allison Winn Scotch at 7:01 AM 4 comments: