So today, I'm talking about finding the right idea for your novel and having it click. (And giving up on ideas that don't.) Check it out on Writer Unboxed.

And Happy New Year to those of you celebrating!
Posted by Allison Winn Scotch at 9:46 AM 1 comment:

So, due to a variety of life-circumstances over the past week and a half including, but not limited to: a daughter who had to go to the hospital (she's fine), a son who has just moved to a big boy bed and who now seems to shun sleep time for play time at all hours, a nanny who was also hospitalized (different reasons, she's also fine, but I haven't had childcare all week - she's back today, hurrah!), a closing on a new house (an nearly all-day event, sigh), renovations and constructions plans for said house, furniture deliveries that didn't come at the appointed windows (of course!) and thus sucked up an entire day, various conferences and meetings at my son's new school, misplaced keys that left me locked out for the better half of a day, and looming and mounting magazine deadlines - I haven't been able to focus as much as I'd like to on my manuscript. Gee, go figure.

Last week, I was still relatively productive: I set a word count for myself each day, and somehow, come hell or high water, I got there despite various (see above) obstacles. This week? I'm floundering. Of course, trying to squeeze in my writing during Sesame Street or nap time (which, did I mention, is non-existent for my son right now?) doesn't help. But still...I hate not meeting my daily goal. So I force myself to write, and it's sort of like drawing blood from a stone.

So I'm curious what you guys do when life gets in the way and your brain just can't settle down: do you keep writing because it's a) a nice distraction (which it is) and b) some writing is better than nothing, or do you just toss in the towel and know that your energy is better served attending the obstacles that have been thrown in your path and returning to your work when you're feeling refreshed?

I can see arguments for both sides. If you forge on, you don't lose momentum, and I do think that even a few paragraphs per day is better than none. BUT, you also risk burning yourself out - I'll admit that I'm sort of dreading getting back to writing today because yesterday was so awful. What if I can't bust out of the funk? So you do risk worrying about that...

Hmmm, I dunno. But I bet that you guys do! :) Tell me, what are your writing strategies when life goes haywire and sitting down to your manuscript seems almost impossible?
Posted by Allison Winn Scotch at 9:16 AM 12 comments:

Help with a Story: Surviving the Holidays While Pregnant

Help! I never, ever troll for sources on my blog, but I'm truly desperate. I'm working on a story on surviving the holidays while pregnant, and I need some more real-life mom tips. You wouldn't think this would be so hard, but I'm having a very tough time getting unique, interesting tips on things such as travel, stress, shopping, entertaining and energy. If you have some ideas and would like to be quoted, please email me! allison@allisonwinn.com Pretty please?? Thank you!! (Or you can post below, and I'll get in touch with you directly.)
Posted by Allison Winn Scotch at 9:43 AM 1 comment: 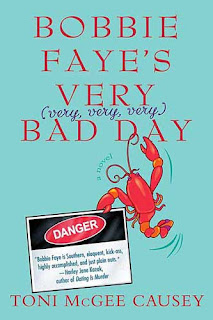 As if the title isn't enough to make you buy this book, Publishers Weekly gave it a starred review and called it "hilarious." And this review in Book Reporter inspired me to shell out for my very own (fabulous) copy. Here's the gist, followed by Toni McGee Causey's answers to a few questions.

Bobbie Faye Sumrall knows that a day without disaster is a day in someone else's life. Criminals have kidnapped her good-for-nothing brother and are demanding her Contraband Queen tiara--the only thing of her mama's she inherited--as random. So Bobbie Faye has to outwit the police, organized crime, former boyfriends, and a hostage she never intended to take (but who turns out to be damn sexy!), in order to rescue her brother, keep custody of her niece, and get back in time to take her place as Queen in the Lake Charles Contraband Festival (think Mardi Gras, with more drinking and pirates).

Luckily, Bobbie Faye knows how to handle guns, outsmart angry mama bears, drive a speedboat, and get herself out of--and into--almost every kind of trouble. If only that pesky state police detective (who also happens to be a pissed-off ex-boyfriend) would stay out of her way . . .
1) What's the backstory behind your book?

Bobbie Faye was that rare story where the character just showed up whole, and about five minutes later, so did Trevor and Cam. I knew these people, inside and out, and knew what kind of long-term arcs they'd have. There was something so exciting about writing a kick-ass woman character, an action / comedy where the woman was capable and smart, even though she does have tons of disasters and obstacles and bad luck aiming her direction. I'd spent a lot of years in non-fiction and then screenwriting; there were some successes, but Bobbie Faye inspired me in a way no other story had.

The daily writing is the most satisfying to me. Seriously--I love the process. I enjoy the brainstorming, character-building, world-building, plotting. I'm one of those weird people who also loves rewriting--it's where a story really takes shape for me.

The least satisfying part is probably after it's done (really done, after copy edits and galleys) and before it comes out, because there's this awful suspension of process. It's hard to concentrate on something new because there's promotional stuff to do and, and nothing can be done about the one that's about to come out, and it's a bit like holding your breath... for a month or so.

3) A lot of my blog readers are aspiring or new authors. How did you land your first book deal?

I started off years ago writing feature and staff articles for The State Times / Morning Advocate; from there, I wrote and edited for a regional magazine and sold to some national magazines. I wanted to get back into fiction, though, and went back to school, finished my degree and did (most of) and MFA in Screenwriting. Before I graduated, though, an agent in L.A. signed me and I spent some time doing the whole screenwriting gig. When I wrote Bobbie Faye, though, I knew I wanted to go back to the novel form, but went ahead and wrote it originally as a script to use as an outline. A friend read the script and handed it to a friend of hers, though I didn't realize at the time that this woman was a bestselling author (under a pen name). She called, asked if I was writing it as a novel; I said yes, and she pitched it to an editor friend of hers and suggested an agent. I told her that first time novelists don't sell on three chapters and a synopsis, but she proved me wrong. Before I knew what had happened, I'd signed with an agent and the editor had made an offer for that novel and the next two in a pre-emptive deal. It still boggles my mind: I'd spent years slogging it out in the trenches, though. At the point of the sale, I'd actually been writing just about twenty years from the point when I first published the non-fiction. It was incredible luck, that sequence of events, so I want to encourage people to keep trying, keep asking for feedback, keep handing your stuff to someone--all that hard work helps to create the opportunity for good luck to work for you.

4) I have a serious procrastination problem when it comes to tackling my fiction. What's your routine? How do you dive it? Do you have any rituals or necessary to-dos before or while you write?

I write mostly in the evening (and blogs are my worst procrastination problem). Evening's are just when I'm most creative, though I tried to fight that for years, and when our kids were little, evenings / nights writing took a heavy toll on my morning coherence in getting them ready for school. I don't really have any necessary to-dos... except maybe quiet / no interruptions. I'll mull for a while and then write in a burst. It took me years to get my family to understand that the writing part--sometimes even the more important part--was happening even when I wasn't banging away on the keyboard. If I'm staring off into space, that's usually when I'm doing the hardest part--brainstorming or arranging/finessing something.
Posted by Allison Winn Scotch at 3:36 AM No comments: