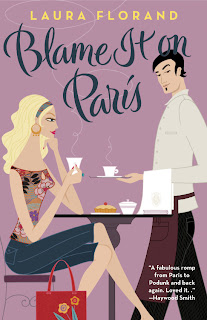 Eleven o’clock on a Friday night. The seamy, sex-obsessed center of Paris. I balanced over a Turkish toilet in a tiny bistro, one stiletto heel propped against the wall to make some kind of writing table out of my knee, trying desperately not to touch anything around me as I wrote an invitation…. Thus begins BLAME IT ON PARIS, Laura Florand’s hilarious and moving true story of a French-American romance between two people, two families, and two cultures.
What does happen when you put a small-town Georgian in Paris and a handsome, sophisticated Parisian in small-town Georgia? Especially when two huge families, one French and the other American, decide it’s up to them to further this romance. The Parisian’s family wants Laura to learn how to prepare snails, while Laura’s family keeps serving Sébastien Mad Dog 20/20 as good wine. How will true love survive?

Today, I'm thrilled to host Laura Florand, author of Blame it On Paris, which Booklist calls "hilarious," and Publishers Weekly hails as "a frothy french connection."
Ready for my five questions with Laura? Here you go...
1) What’s the backstory behind your book?
Well, BLAME IT ON PARIS actually happened. It is the true story of one American and one handsome Parisian who fell for each other and the way their crazy families and even crazier cultures met, clashed, and—got along. You know that old Reese’s commercial, where the two people collide and one’s chocolate lands in another’s peanut butter? And it turns out to work much better than they suspected? It was like that, but everything that happened was so funny and yet so huge, I ended up telling the story.

2) It seems that a lot of readers confuse fiction with real life, assuming that a novel must be an autobiography of the author as well. How many elements of your real life are reflected in your book?
Although nobody ever wants to believe me—they swear I must have exaggerated—this is a completely true story. Even my own editor didn’t quite believe me, I think, so it got published as a novel. Which leads to a very strange confusion of fiction and real life, if you ask me.

3) A lot of my blog readers are aspiring or new authors. How did you land your first book deal?
I worked very hard for a couple of decades (I started writing when I was nine) and studied the publishing world. Then I submitted a proposal. Yes, a proposal—despite all that research, I didn’t know memoirs were treated as novels and that I should submit the whole thing. A great agent took me on and encouraged me to finish it. When I finished it and it was much more comic and light-hearted I think than he was used to (this was a purely non-fiction agent), he referred me to a close colleague who loved it, and…she shopped it around. Et voilà. We went with Tor Forge.

4) I have a serious procrastination problem when it comes to tackling my fiction. What’s your routine? How do you dive it? Do you have any rituals or necessary to-dos before or while you write?
I have a 15 month old baby. I don’t really have much choice—I can either sit down and write or procrastinate my way right through her nap time. So I just jump straight in and go. In a way, it’s like having a constant deadline—those can be very effective.

5) Clearly, your book will be optioned for a multi-million dollar film deal! Who would you cast as the leads, if you were given creative control?
That’s always a tricky question, since my characters are real people and I have a hard time imagining anyone else in their shoes. I would like to go back in time and have Lauren Bacall play me, though. It’s a fantasy of mine to look and act like Lauren Bacall in To Have and Have Not or The Big Sleep. I suspect the director would choose someone with a much ditzier persona, alas.
Posted by Allison Winn Scotch at 10:08 AM

Blame It on Paris said...